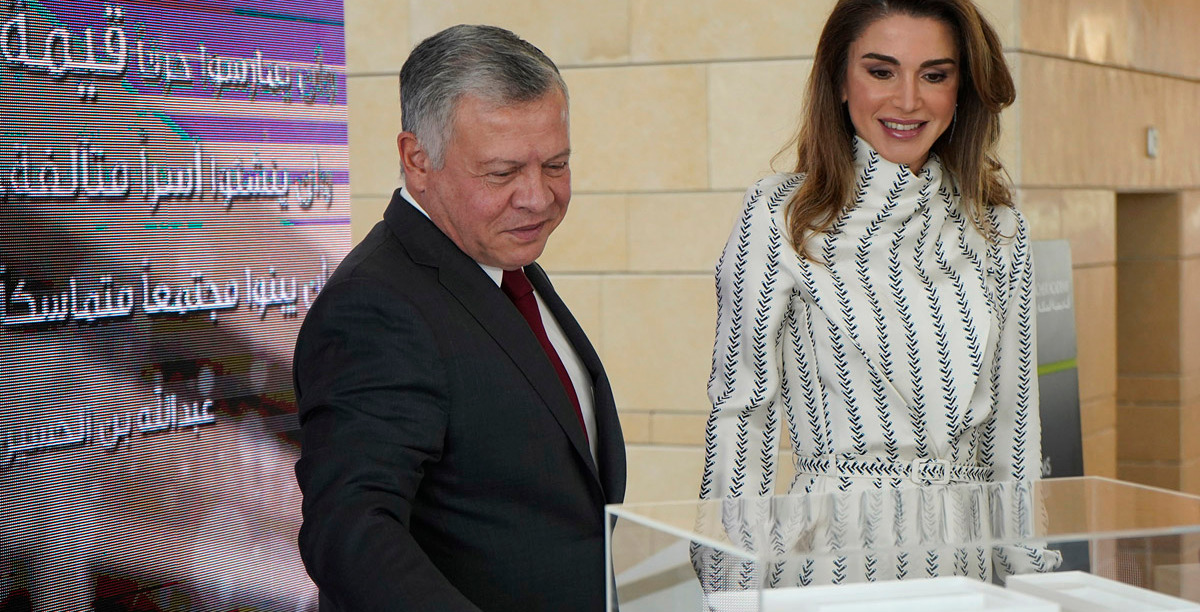 His Majesty King Abdullah, accompanied by Her Majesty Queen Rania Al Abdullah, inaugurated the new premises of the Queen Rania Teacher Academy (QRTA) on Sunday at the University of Jordan, which aims to improve the quality of education in Jordan and the region.

Located on a lot owned by the University of Jordan within its campus, QRTA’s new premises are provided with the latest tools and technologies to support teacher trainees and equip them with key skills and teaching techniques. Its facilities include 34 classrooms, four lecture halls, five computer labs, three science labs, an auditorium, and a library.

During a tour of the new premises, King Abdullah expressed his appreciation for the role that teachers play in building generations, and his confidence in their ability to develop Jordan’s human resources, which have achieved a distinguished standing in the region and the world.

The King and Queen sat in on a class offered under the academy’s Teacher Education Professional Diploma (TEPD), where teachers shared their experiences with the pre-service diploma. Their Majesties also stopped by a workshop for public school teachers on developing children’s creative thinking skills.

Speaking at the inauguration, Queen Rania thanked all those who contributed to the establishment of the academy, including His Majesty, who has always kept watch over the education of Jordan’s children, ensuring it meets his ambitions for them.

"There is no one more worthy of our resources, time, and effort than the person standing at the front of the classroom the teacher who spends a third of her day with our children, and who imparts principles and values to them alongside math and language skills," Her Majesty said.

"When I first entered public work, I realised that no goal is more important to me than empowering teachers," Her Majesty said. "The lucky ones among us find someone to inspire them and push them toward their goal. I am fortunate to have found that in the person closest to me, and I am honoured to be his lifelong companion," she continued.

Addressing His Majesty, Queen Rania thanked the King for his unwavering support throughout her journey with the academy.

"You were there to help me see clearly through the many challenges of education reform. You are always generous with your advice when my doubts get the better of me. And, above all else, you reinforce my faith, every day, in the importance of educating our children and supporting their teachers," Her Majesty stated.

"I know you never wait for a word of thanks," the Queen noted. "Even so, from myself and on behalf of every student, father, mother, teacher, and principal thank you, Your Majesty. If not for your vast heart, where every child can find a home, this project would not have seen the light."

Noting the many sacrifices made by those "who have chosen to learn in order to teach," Her Majesty commended teacher trainees who leave their homes before sunrise to make their way to the academy, in order to learn how to create a classroom environment that encourages inquisitiveness and learning.

"This is ambition; this is the foundation of citizenship; and these are the values that Your Majesty seeks in the builders of the future. Our teachers are your soldiers, and they are here today, arming themselves with the knowledge and determination to bring up generations who are confident and capable of conquering the challenges of their time," the Queen concluded.

In his remarks, Prime Minister Omar Razzaz stated that the opening of QRTA’s new premises is a national achievement and "an expression of the considerable attention dedicated to education in Jordan."

In turn, QRTA CEO Haif Bannayan said His Majesty’s support of the launch of the National Strategy for Human Resource Development, which recommended reforming teacher training in the Kingdom, has given QRTA’s mission a great push forward.

"The academy partnered with the world’s greatest in this field and hired the best Jordanian teaching staff, successfully launching the TEPD under the patronage of Her Majesty in September of 2016," Bannayan said.

The TEPD aims to prepare future educators to treat classrooms as the birthplaces of innovation, leadership, and civic participation among Jordanian youth.

With the support of the Jordanian government, QRTA has graduated its first two TEPD cohorts, and is currently training its third, consisting of 800 teachers. The academy aims to graduate 1,500 teacher trainees under the TEDP in 2020 and 3,000 in 2021.

Launched in 2009, QRTA is an independent non-profit organisation committed to the vision of Queen Rania to empower educators with skills, recognition, and the support they need to excel in the classroom.

In partnership with the Ministry of Education and the Teachers College at Columbia University, the academy offers training programs for teachers that align with local and regional educational needs.

In addition to the pre-service TEPD, QRTA also offers the Advanced Instructional Leadership Professional Diploma for school principals as well as in-service programs for current teachers. In recent years, in collaboration with the Ministry of Education, QRTA has expanded its programs to cover all governorates.

Royal family members and a number of senior officials, MPs, diplomats, and representatives from the public and private education sectors attended the inauguration.